You are here: Home » 4. Dogodek v Bolgariji (Sandanski) » Description of the 4. event (Bulgaria)

Event title: ART AS A PATHWAY TO THE INTERCULTURAL DIALOGUE 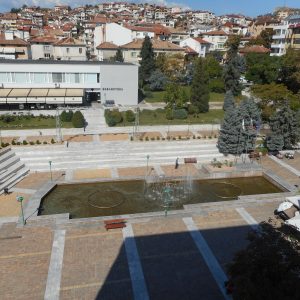 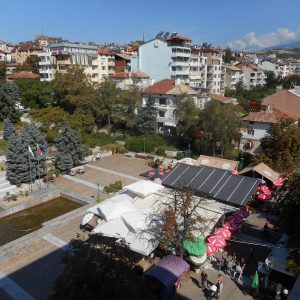 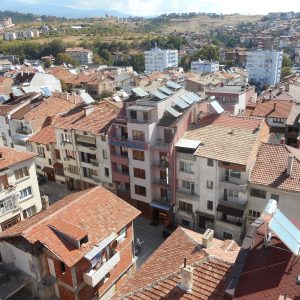 Representatives of the leading partner organization, the Association Theatre Kolenc, Anka Kolenc and Lovro Lah, – because the meeting was open to the public – again briefly presented all the partner organizations, and the project Heart of Europe, HE-ART and its initial creators.

The goal of our joint project Heart of Europe, HE-ART, is to promote the awareness of love, spreading mutual love, friendship, compassion, mutual acceptance, and supporting diversity while preserving identity, as the only way to create a common European cultural heritage, everything that is the mission of our centre of the heart of Slovenia. We believe that this is the only way to a loving sustainable life on our planet.

THIS IS ALSO THE BASIS OF EVERY FORM OF CULTURAL TOURISM. From all of this stems the basic outlook, the relationship towards many problems and issues of today’s European society, with which we carry out our theatrical and pedagogical mission.

Lovro Lah, along with all those present, carried out morning connecting activities – The magic of friendship.

Ilina, representative of the Bulgarian partner, Euni partners, presented the 274 European community regions, the cooperation, populations, employment, aging, and problems with cooperation. In relating to this, she also presented us a film about European cohesion.

We continued with the Interactive Workshop, which was also led by Ilina Jakova, member of the EUNI PARTNERS on the benefits and problems of the EU cohesion (mutual attraction and coherence). An interactive workshop was held in several groups, where discussions were held on the causes of disconnection and organizational models that would allow mutual understanding and integration. In the second part, the members of the individual collectives prepared a report on their findings and suggestions. Several rapporteurs considered that the countries that subsequently joined the European community do not have the same opportunities as those who joined the EU at the beginning. 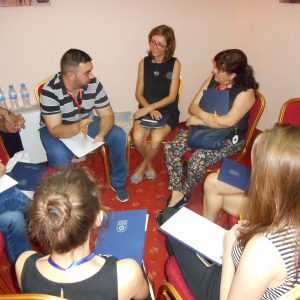 AFTER WORKSHOP ON EU COHESION WE REPORTED IN COUPLES

After lunch, which was a wonderful presentation of the culinary heritage of Bulgaria, we went to the city museum where we visited numerous artistic sculptures and objects from the Roman period of life of the town of Sandanski, and we also saw a short film about Spartacus, which is the central figure of the European heart point Sandanski. In the lower rooms of the museum we discovered beautiful model floor mosaics, which are typical of Bulgaria’s artwork.

In the working premises of the bishop’s basilica, we have gotten practical experience during making mosaics ourselves. From small particles, with the help of mentors, we created small mosaic pictures of the rose, which is typical for Sandanski and Bulgaria. For Bulgaria, the smell of roses is also characteristic and prevailing, which is most common souvenir of this country. It is stored in special, wood-carved, decorative bottles. With art we thus paved the way to intercultural dialogue and a deeper understanding of the cultural pace of Bulgaria. 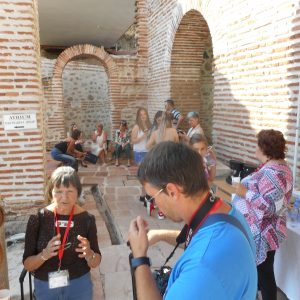 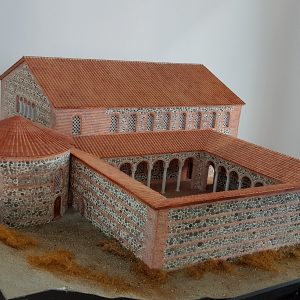 MODEL OF THE BASILICA 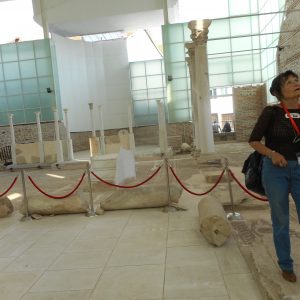 SANDANSKI, BASILICA AND THE AFFLUENCE OF MOSAIC

After a coffee break, we took a bus to a slightly elevated place above the city of Sandanski, where a statue of Spartacus stands at a beautiful viewpoint. Spartacus was born near this town, and he was the leader of the Roman armies of revolted slaves – a symbolic fighter for freedom, compassion, and a life worth living, in which you can grow and learn. Therefore, the Bulgarian partner organizations decided that the statue of Spartacus will be the Heart Point of Bulgaria. The statue of Spartacus is also an extraordinary work of art, visually and spatially powerful, that exhumes the spirit of the mission of the project Heart of Europe, HE-ART.

We continued to socialize at a dinner that fused with the Bulgarian evening. We had a pleasant time socialising.

During the preparations for the departure to Melnik, we, the representatives of the leading partner, association Theatre Kolenc, in a conversation with the authorized person, Ms Sorge, who administratively represents EACEA, Europe for Citizens, explained the main mission of the project Heart of Europe, HE-ART, in greater detail. In this context, we presented the tasks related to the implementation of the project in particular.

Then we went to Melnik, the smallest town in the country and the best wine growing region in Bulgaria. In the course of professional tourist tour, we saw the rich cultural heritage of Bulgaria, gathered in the town of monasteries, in Melnik, which is an archaeological and architectural reserve. The hilly area with exceptional views is dotted with monasteries and churches that enchanted us with their exceptional treasures and shine. Artfully made, colourful frescoes were so vividly eloquent that their mission, and the strength they gave to the believers, were palpable, and also cross-cultural.

MELNIK, THE SMALLEST BULGARIAN CITY, CITY OF SHRINES AND MEMORIES OF THE PAST 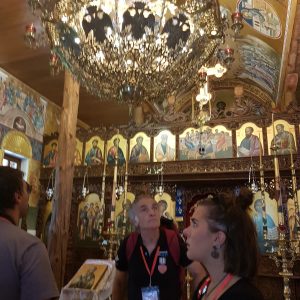 When we returned to the starting point in the town of Melnik, we split into groups and continued with handcrafts and art workshops that were related to the project. With a variety of ideas, we created the Heart of Europe, HE-ART logo made of clay. We then painted our logos, and some of us took the opportunity to test ourselves on the potter’s wheel, making a simple pot. All the works were then exhibited at a temporary art exhibition, which we later took with us.

WORKSHOP ON CERAMICRYING, ART MAKES A PATH TO INTERCULTURAL DIALOGUE 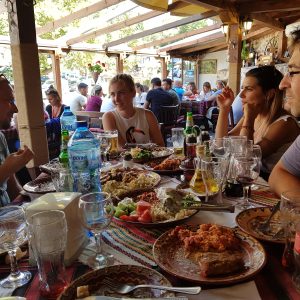 After lunch, during which we sampled the rich culinary heritage of Bulgaria and the local environment, we went to the wine tasting and a guided visit of the “Vila Melnik”. After the introductory greeting of the host and the cordial hospitable servings of cheese and meat delicacies, which in Bulgaria are a part of the wine tasting, the leaders of the partner organizations withdrew and at the end of the table continued with a meeting, where we discussed current problems. We talked about tasks and support for better understanding of the project, and about accommodation in Sweden according to the program that we would have to carry out there. 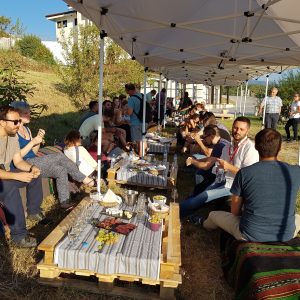 DISCUSSION ON VISION AND SUSTAINABILITY OF THE PROJECT HEART OF EUROPE, HE-ART, IN WINERY MELNIK

The most important conclusion of this rather extensive meeting was the feeling of synchronized beat of the project Heart of Europe, HE-ART, in which we feel deep connection and the belief that we are each other’s support to do good. We also discussed scepticism, Euro-scepticism, and the vision and the sustainability of the project.

In the late afternoon hours, we also visited the winery “Villa Melnik,” with extensive production of the best Bulgarian wines, and the cellar where they are kept.

Towards the evening, we returned to the city of Sandanski, where dinner awaited us, as well as a heartfelt get-together, as we also celebrated the 68th birthday of the leader of the project Heart of Europe, HE-ART, Anka Kolenc. We concluded the evening with song and Bulgarian dances, where worry for intercultural dialogue was unnecessary. 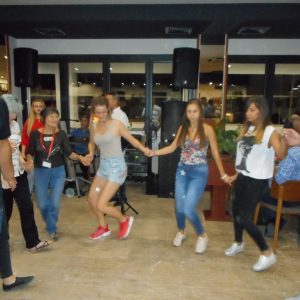 WHEN THE HEART OF EUROPE DANCED

After breakfast, we continued the discussion about Euroscepticism and scepticism in general, which we have not completed in the previous day. Valentine presented her experience with the immigrant who she helped, but when she was very scared, as the event could have ended very badly.

The film, made by Valentine with her production company Mata – Malam for the project Heart of Europe, HE-ART, and it is titled “Naked hearts”, breaks down this problem in a completely different way. When we talked about it again after the film was re-watched, we found that both aspects were extremely important. We can never prescribe responses, but it is important to develop compassion for what every individual feels; compassion that always shows the right path.

Anka Kolenc noted that, at our first meeting in Slovenia, she repeatedly emphasized that in the process of creation of cultural tourism in individual environments, we could not and should not prescribe how to create it.

When we wonder what is our work in the project Heart of Europe, HE-ART, it can be said to be the ability to notice that we are able to attract people who can help us build compassion, understanding, love, and connections. When we planned the project, we first saw the general framework – that is, we generally talked about what is a refugee, what is stigmatising, despair … and how we must act in approaching it. That is why our film Jemima was a satire, in order to attract people to observe these problems. We must be grateful to Valentine, so that we could take a step forward. That is how our work will continue. With everything we know and can do – in terms of connecting, love, and friendship.

Some of us can draw attention to these problems with our history; some know how to draw; we can create a statue like, for example, Spartacus, and remind people in this way to pay attention to connectivity, freedom, and liberation.

The project cannot prescribe what and with what means someone will do something, not if we want to provide a free expression of the wonderful diversity of identities. That’s why our project is so unusual and  even strange for many. We also had difficulties explaining this to Ms Chiara, when she wanted to clarify some details regarding the mission of the Project Heart of Europe, HE-ART, in order to report to the EACEA administration.

Nevertheless, we now know for sure that we are developing in the right direction. We are representatives of love, connectivity, heartiness, mutual acceptance and understanding. The next steps must be in line with what Valentine showed us in her film.

In the following we will therefore ask ourselves: What is truly compassion to each of us? What is really the love we want to relay? What really is a European citizen – for each of us? And above all, what is compassion – so that we can really feel each other and be aware, so that we can continue taking steps forward.

In order to reinforce her thinking, Anka Kolenc also proposed the “magic of friendship”, a hearty hug, that she hoped would hold to the next meeting in Sweden. To conclude, as an aid to the implementation and expansion of the project, Anka Kolenc and Lovro Lah presented a documentary film of the 1st event in Slovenia. They said that such a documentary will be made about each project event, in order to facilitate the expansion of the project, so that in each of the partner countries, we can have starting points for a wide variety of promotions. With the films we can organize conferences, round tables, lectures, etc.

In the end, Anka and Lovro expressed their gratitude to all partners for their cooperation, most of all to the organizers – Euni Partners led by Ilina Jakova and to the municipality of Sandanski, that with its professionalism, professional approach, and heartiness – both in terms of the content and spaces, organized an unforgettable project meeting.