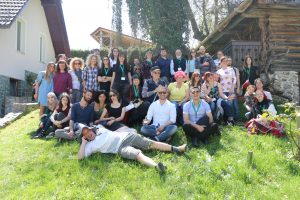 Partners of Heart of Europe in Slivna, April 2018

Heart point of Heart of Europe in Bulgaria, Spartacus, in the vicinity of town Sandanski, September 2018

Heart of Europe, HE-ART project is actually been emerging as long as the project of the centre of the heart of Slovenia, GEOSS, since 1981.

At the time, the GEOSS builders pledged themselves to be guided in the creation of the heart of Slovenia by the thought drawn from Zdravljica, today’s Slovenian national anthem, which heart-renders us, friendly connects us, at a personal, national and international level.

The project therefore stems from the mission of GEOSS, from the center point of the heart of Slovenia. Just as the mission of GEOSS in 1981 was formed by the leading builders of this heart: the initiator Jože Dernovšek and the author, Peter Svetik. They wanted to create a point that, through self-discovery and self-acceptance, would ensure connection, friendship, compassion and mutual acceptance of all people, regardless of their differences, ways of thinking and belonging. In 2012, Anka Kolenc, who is also the author of Heart of Europe, HE-ART project, initiated the first international expansion of the project with the International Day of friendship in alliance at GEOSS, Crow’s flight to freedom.

In the framework of the Association Theatre Kolenc the possibility arose to continue the international expansion of the mission of GEOSS. The basic mission of the association (Association theatre Kolenc) is to teach and spread awareness through the experience of art and nature. In addition to the wide variety of pedagogical, animation performances and events according to the curricula of Slovenian schools, the association is also an authorized provider of the association GEOSS for all programs and guided tours related to its mission. With a professional theatre approach, association organizes guided tours on various educational paths related to cultural heritage and history, archeology, ethnology, paleontology, geology and art.

With these tasks and with this approach (ie through art and nature), the Association Theatre Kolenc wants to convey to people experiences that relate to values such as respect, love, compassion, courage, heartiness. Our ancestors were also associated with these values, as on the basis of this, during the Second World War, the event of the Crow Flight also took place, which was the basis for the introductory project of the Family Theatre Kolenc into the international networking of the heart points of cities. In this way, the Association Theater Kolenc continued to create and network the heart points of the Heart of Europe.

The project, which was also authorized for the Association Theatre Kolenc by the Municipality of Litija, involved 13 partner organizations from eight countries (in addition to Slovenia: Italy, France, Albania, Bulgaria, Sweden, Spain, Greece). The project is aimed at international cooperation and the creation and establishment of a permanent network of heart points with features originating from the noble mission of GEOSS. Each international cultural heartland is a creative centre that will sustainably plan, design, execute and take place cultural events that promote heart values, such as embracing diversity, understanding, humanity, friendship and solidarity, heart bonding while maintaining one’s identity, compassion and sustainable survival on Earth – on a private, national and international level. With the HE-ART network, we began to set an example for cultural tourism; we have established a heartbeat of the heart point that will work for the town, city, for the homeland and for international cooperation and integration. Among other things, in six partner countries, we also addressed youth problems, unemployment, globalization, immigration … European citizenship, skepticism, stigmatization …

During the project, the Association Theatre Kolenc also created and presented a heartfelt, moving and entertaining movie satire for adolescents and adults – about the emigrant girl Jemima – entitled HERE COMES JEMIMA, in partner countries. The film was a starting point in three partner countries to highlight the problems of emigration, labeling, national identity and intergenerational cooperation. The moving film about migration, which was encouraged by the Heart of Europe project, HE-ART, was also produced under the guidance of a French partner, the Mata-Malam Theatre, and in collaboration with Swedish partners we produced a theatre play of the virtual relationships of today and the world and the great need through lively fellowship, acceptance, compassion, awareness of one’s national identity, respect for beautiful diversity and cooperation.

Under the leadership of the leading partner, the Association Theatre Kolenc, the following were also created: the Heart of Europe logo, incorporating the GEOSS floor plan, the Heart of Europe calendar for 2018, the Handbook on establishing of Heart Points, and documentaries on all six project events. We have both published on the project website, which already exists in English, and will be translated into all partner languages in the coming months.

In the heart of Italy, in the city of Rieti, near Rome, at the last meeting, we also signed partnership memorandums to commit our heart points to work sustainably as well as permanently, even after the funding for their initial momentum will already be spent.

We welcome you to the project’s website, heart-europe.com, as its purpose is to spread the core mission of GEOSS, to love and respect its heritage and identity, and to heartily accept and admire the diversity of all who are with us in peace, respect and love – to all four sides of the sky – to the end of the world!